Business and Economy of Siwan

Siwan is noted for being the birthplace of the first president of India, Dr. Rajendra Prasad. The average literacy rate of Siwan is 72%, and this is much higher than the state literacy rate of 63.8%. A higher literacy rate is always favorable to the economic progress.The economy of Siwan district, for the most part, is driven by the agricultural sector. The agricultural products are alluvial in nature – consisting majorly of paddy and wheat. 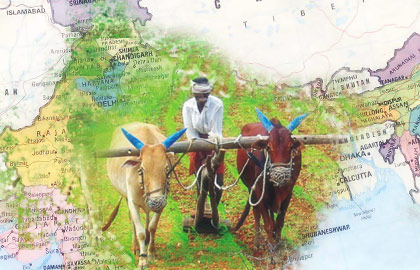 Agriculture is the backbone of economy in the region.The total cultivable area (net area sown) that is used in an agricultural year takes up 72.6% of land coverage. Apart from this, the GDDP of Siwan is the 10th largest in Bihar. Wheat, rice, maize, sugarcane and potatoes make up the other items of produce in the region. New agricultural practices are put into use to increase the productivity of crop in the region.

Small industries dominated by micro enterprises and artisan-based industries, play a significant role in the industrial sector in the state. But over the years, the industrial scenario is seeing a gradual decline.
The industrial setting is based on small enterprise units consisting of wood and wooden based furniture, leather based products and paper based products. Four industrial units are currently operating, out of which two are cement units.The artisan based industry has a huge potential in the Siwan district when compared to other districts in Bihar. Earlier, the handlooms in Siwan produced bed sheets, towel, waist leg wrap (lungi), mosquito nets, shawls and sarees.The government is making extensive plans to revive the weakening economy and improve industrial development, in order to continue and sustain the production industry.One of the recently proposed plans is to bring in agro-based cottage industries.

Furthermore, owing to the abundant cattle population, there is also a proposal to take initiatives in developing milk processing industries. The diary sector already consists of operational units by Diary Directorate and COMPFED.The industrial profile of urban Siwan consists of retailing of food and other consumables, particularly focused on restaurants, food stalls, hotels, tea shops, and grocery shops.Other retail activities include – pharmacy, hardware shops, and internet and computer centers. By and large, service activities include wholesale trading of agricultural produce.The construction sector services are growing significantly as more people are investing in homes in the region, for the reason that a lot of NRIs are returning back to Siwan.The economic base is also supported by a number of schools, colleges, banks, health care industries, rail and telecommunication.